Most innovation occurs within firms and industries through improvements to existing products. However, countries also develop new industries on the basis of skills and other inputs used by existing industries. This enables countries to diversify and alter the range of products that they export. A new index characterising a country’s export mix – Whiteshield Partners’ capability and innovation potential index (CIPI) – is designed to capture potential in both of these areas.33

The starting point for the index is the economic complexity of a country’s exports. A country is considered to have a complex economy if it enjoys a revealed comparative advantage in many products that can only be produced and exported by a small number of other countries. A revealed comparative advantage means that the share of a particular good in a country’s total exports is larger than the share of that good in total world exports (implying that a country specialises in producing that good in the global market).34 In contrast, if a country enjoys a comparative advantage in few goods and many other countries have a comparative advantage in those goods, the economic complexity index will be relatively low.35 Countries with a more complex economic structure tend to innovate more, as more complex industries help to develop the skills, technologies and management expertise that support innovation.

The potential to achieve innovations that help countries to develop comparative advantages in new industries is captured by a related concept – the opportunity value of a country’s export structure.

This measure looks at the complexity of goods in which a country does not currently have a comparative advantage and sees how far removed they are from the goods in which it does, thereby seeing how difficult it would be to cover the distance between those exported goods and potential products.

If a country’s export structure has many complex industries in close proximity to its existing export industries, it will be easier to innovate and expand into new products, as those products will require similar skills and technologies and will themselves be conducive to innovation.

The CIPI (see Chart 1.4.1) takes the average of a country’s economic complexity and the opportunity value of its exports. On the basis of this index, countries in the transition region can be divided into four tiers, from those with the greatest potential to innovate across sectors to those with the lowest potential:
• Tier 1 comprises countries that are already members of the European Union.
• Tier 2 is made up of countries that are in the process of developing strong capabilities and have considerable potential for development. This group includes Russia, Tunisia, Turkey and Ukraine.
• Tier 3 includes other countries in the southern and eastern Mediterranean, as well as Albania, Cyprus and FYR Macedonia.
• Tier 4 mainly comprises countries in Central Asia and the Caucasus, which would seem to have limited potential to increase the complexity of their output in the short term. 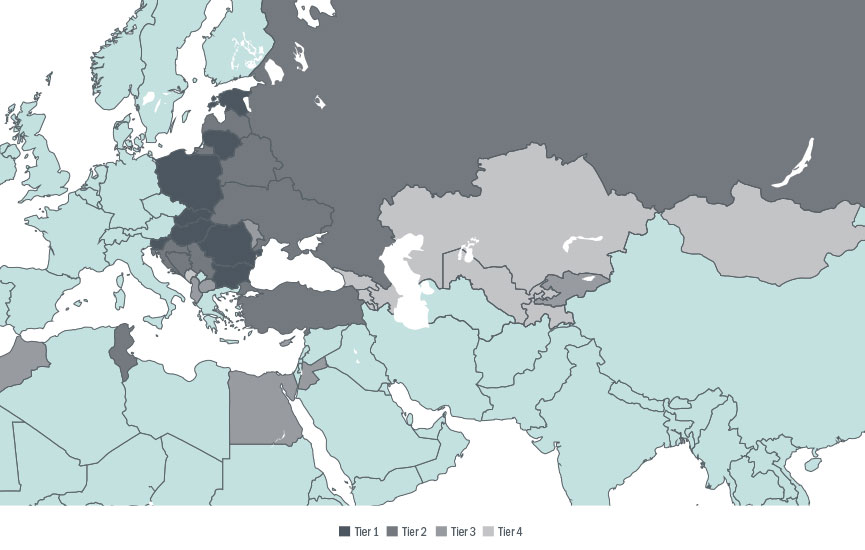 Source: UN Comtrade and Whiteshield Partners.
Note: Darker colours correspond to higher values for the index. Based on 2013 data, with the exception of Azerbaijan, Bosnia and Herzegovina, Bulgaria, FYR Macedonia, Kyrgyz Republic, Morocco, Russia, Slovak Republic, Tajikistan and Uzbekistan (for which 2011 data are used).